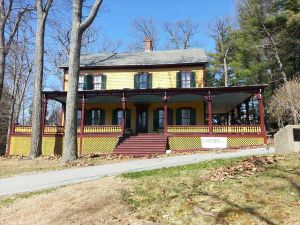 Posted on 18th October, 17 Category: You Gotta Have Friends

The U.S. Grant Cottage State Historic Site has been named a New York State Literary Landmark by United for Libraries and the Empire State Center for the Book. A Literary Landmark is a community location associated with a literary figure or their work. On September 16th, there was a plaque dedication ceremony.

Ulysses S. Grant was the 18th President of the United States and Commanding General of the U.S. Army during the Civil War. He completed “Personal Memoirs of U.S. Grant” at the Cottage in Wilton, NY. It was his final home, where he spent his days until he died of throat cancer in July, 1885.

The Cottage remains mainly the same as it did when Grant stayed there, with original furnishings, decorations and items that belonged to Grant. Visitors can tour the Cottage from Memorial Day weekend through Columbus Day.

The Literary Landmark designation program started in 1986 and there are 23 additional locations in New York State.

The Friendsof the Ulysses S. Grant Cottage operate the state historic site mainly with volunteers, with the help of a small staff.


Tags:
Category: You Gotta Have Friends