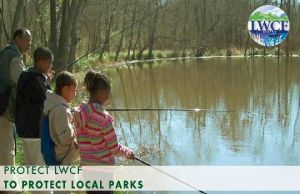 Since its inception, the Land and Water Conservation Fund (LWCF) has supported more than $300 million worth of projects in New York. These projects have touched every region of the state and have assisted in the development of many state parks, as well as funding for land stewardship, conservation easements, national parks, national heritage areas, wildlife refuges, forests and trails. It also aids in the protection of recreational areas, historic battlefields, habitat, watersheds and forestlands.

A few of the more than 1,200 projects funded in New York include $3.8 million for the Roberto Clemente State Park development and improvements, $1.9 million for Allegany State Park, $1.6 million for Burnet Park and zoo in Syracuse, and $2.5 million for Napeague Dunes acquisition and protection.

Just announced on July 5, 2017, LWCF’s American Battlefield Land Acquisition Grants program will fund $176,000 for the protection of the Fort Ann Battlefield, and $684,000 for the Sackets Harbor Battlefield State Historic Site.

Unfortunately, the President’s Fiscal Year 2018 Budget proposal would decrease funding for LWCF by 85 percent from this year’s level. No tax dollars are used to fund LWCF, instead the program has always been funded by offshore drilling fees. It makes sense that an environmentally harmful practice, such as offshore drilling, should fund a program that protects our green spaces.

Protecting parks, forests and historic sites not only benefits people and the environment, it’s good for the economy too. According to the Outdoor Industry Association, outdoor recreation activities support 305,000 jobs and $12.4 billion in wages, consumer spending of $33.8 billion, and state and local tax revenue of $2.8 billion for the New York State economy. Outdoor recreation includes hiking, camping, wildlife viewing, hunting, fishing, kayaking, bicycling and more. These activities wouldn’t be possible without protected outdoor spaces.

To support continued funding for LWCF in 2018, you can take action by contacting your federal representatives.