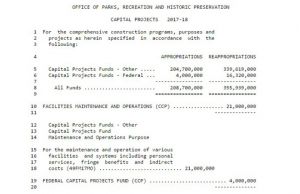 The New York State Fiscal Year 2017-18 Final Enacted Budget has great news for New York’s parks! We thank the Governor and Legislature for New York State’s continued commitment to improving and expanding access to outdoor recreation. Governor Cuomo's NY Parks 2020 program is a multi-year commitment to leverage $900 million in private and public funding for State Parks. This year’s budget adds $120 million for park infrastructure repairs and upgrades to the $469 million provided over the past five years to revitalize and reinvest in state parks and historic sites. Additionally, the budget appropriates $70 million to the Department of Environmental Conservation (DEC), which includes funding for Adventure NY, a program similar to NY Parks 2020, intended to upgrade DEC’s public facilities.

The funds have touched every region in the state. Upwards of 380 projects at 130 parks and historic sites have been completed or are underway. Projects address a $1 billion backlog in infrastructure needs, and critical health and safety repairs, such as replacing aging water, sewer and electrical systems, rehabilitating restrooms, and repairing bridges, roads, pools, and much more. These investments have leveraged $264 million in other funding sources, which supplement and enhance these great projects.

The budget includes $300 million for the Environmental Protection Fund (EPF), which supports and protects parks by providing critical funding for stewardship, public access, open space land protection and the municipal park grant program. It also contains the third year of funding for the Park and Trail Partnership Program, administered by Parks & Trails New York. These capacity building grants strengthen grassroots groups as they assist the state’s parks, trails and historic sites. Additionally, the Connect Kids to Parks program funds grants to reimburse bus costs, tolls, the fee for bus entry into the facility and any programs fees at various State Parks and DEC facilities.

Another exciting development in the budget was $200 million in funding for the Empire State Trail, which, when complete, will be 750 miles of continuous multi-use trail from New York City to Canada, and Albany to Buffalo. It will be the longest multi-use trail in the United States and great news for trail lovers, families looking for safe recreation, bikers, runners, walkers and anyone who wants to get outside.

The Empire State Trail project will create 350 miles of new multi-use trail, most of which are currently unfinished sections of existing long-distance trail corridors, stretching the investment to create a truly statewide system. This will complete the remaining 20 percent of the 360-mile Erie Canalway Trail between Buffalo and Albany, and the remaining 40 percent of the Hudson River Greenway between New York City and the Southern Adirondacks. It will also create bicycle-friendly enhancements to the on-road Bike Route 9, connecting the Empire State Trail to the Canadian Border.

The Empire State Trail will make New York State a destination for outdoor recreation and will connect a rich network of State and National Parks, Historic Sites, and cultural amenities located along the route. This includes the Erie Canal, the Walkway Over the Hudson, the Saratoga National Historical Park, the cities of Buffalo, Rochester, Syracuse, Albany, and New York, and the Adirondack and Catskill Mountains. It will contribute to New York’s tourism economy for a great many communities along the route, just as the Erie Canalway already contributes an annual economic impact of $253 million and supports more than 3,400 jobs, according to a study by Parks & Trails New York.