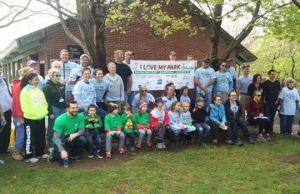 At the junction of the Mohawk and Hudson rivers in Waterford, NY, a small state park known as Peebles Island is situated. The park offers a variety of hiker, biker and dog-friendly trails overlooking a stunning landscape and rushing falls. Over the years, several groups including a Mahican tribe, Dutch settlers, and a Continental Army unit have called the island ‘home.’ The historical and archaeological significance of the park is well known and appreciated by visitors and surrounding residents alike.

In the spring of 2016, a group of park goers began plans to form a Friends of Peebles Island State Park group. In the past year, progression has been slow, but steady. Volunteers have made connections with and garnered the support of the Regional Director of Parks, Recreation and Historic Preservation, Alane Ball Chinian, as well as green space advocates, Parks & Trails New York. For the group, the next steps will include formal incorporation and the development of a board.

Looking forward, volunteers have several goals for the park. In an interview with Dave DeMarco of Friends of Peebles Island State Park, he cited program development and trail improvements as some of the main goals for the Friends.

Thus far, Peebles Island has been able to implement a number of changes thanks to fundraising by the group and support by the community. Over the past year, trails have become visible from Google Maps, there has been new signage and markers throughout the park, and a variety of programs have been offered to and attended by the public. Program topics have included beekeeping, loons, and gardening, to name a few.

On January 1st, Peebles Island hosted a ‘First Day Hike’ which had nearly 140 attendees, a sign that the community is interested in and committed to the success of the park.

Peebles Island will be hosting an ‘I Love My Park’ cleanup day on May 6th, 2017, from 9am to 1pm. The event is a great opportunity for community members to participate in trash pick up, trail restoration, and learn more about the park’s history. More information is available on the park’s Facebook page and online registration is available here.