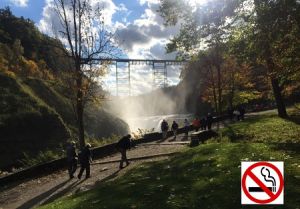 New York State Parks first initiated the policy to ban smoking from high-use areas in state parks, including beaches, pools, picnic shelters, concession stands, and playgrounds, in 2013. It was soon after challenged in court.

PTNY filed an amicus brief during this earlier appeal in support of the agency’s position and its authority to limit smoking as an aspect of overall management of its properties.

On Thursday, March 31, the Court of Appeals ruled that the smoking ban could be legally enforced by New York State and is not unconstitutional. Judge Eugene Fahy wrote that this is the case because the state has the "authority to provide for the health, safety and welfare of the public in connection with its oversight of the state park system."

Anyone found smoking in a state park near a "No Smoking" sign at a high use area, or within 50 feet of a public building, can be fined up to $250.

The decision also noted that the policy banned smoking in "less than 5 percent" of the total land in the State Park system.