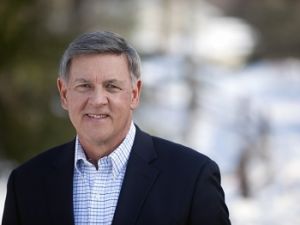 The name Rich Funke (pronounced “funky”) may have been unfamiliar in Albany during the 2014 New York State Senate election, but it is easily recognized in Western New York. Funke spent 40 years as a broadcast journalist, mainly in Rochester. After retiring from being the main anchor on WHEC-TV news and his induction into the New York State Broadcasters Hall of Fame, he decided to run for state Senate to give back to his community.

Since taking office in 2015, Senator Funke has proven to be a Friend to New York’s outdoors. He was quickly selected to chair the Senate Committee on Cultural Affairs, Tourism, Parks & Recreation, the committee that oversees issues related to the state parks system. In February 2016, Senator Funke joined PTNY on Park Advocacy Day. He expressed his support for nonprofit park Friends groups and our Park & Trail Partnership Program, which provides grants to strengthen these organizations.

The 55th district, which the Senator represents, includes Monroe and Ontario Counties. His district office overlooks the Erie Canal and Erie Canalway Trail in Fairport. Senator Funke also championed our efforts to secure dedicated Complete Streets funding, calling for inclusion of $20 million in set aside funding for bike lanes, sidewalks, and multi-use trails in the Senate budget. While ultimately unsuccessful in securing this funding in 2016, Senator Funke’s work has provided momentum for this landmark funding, and for other bicycle and pedestrian-related efforts in New York state.