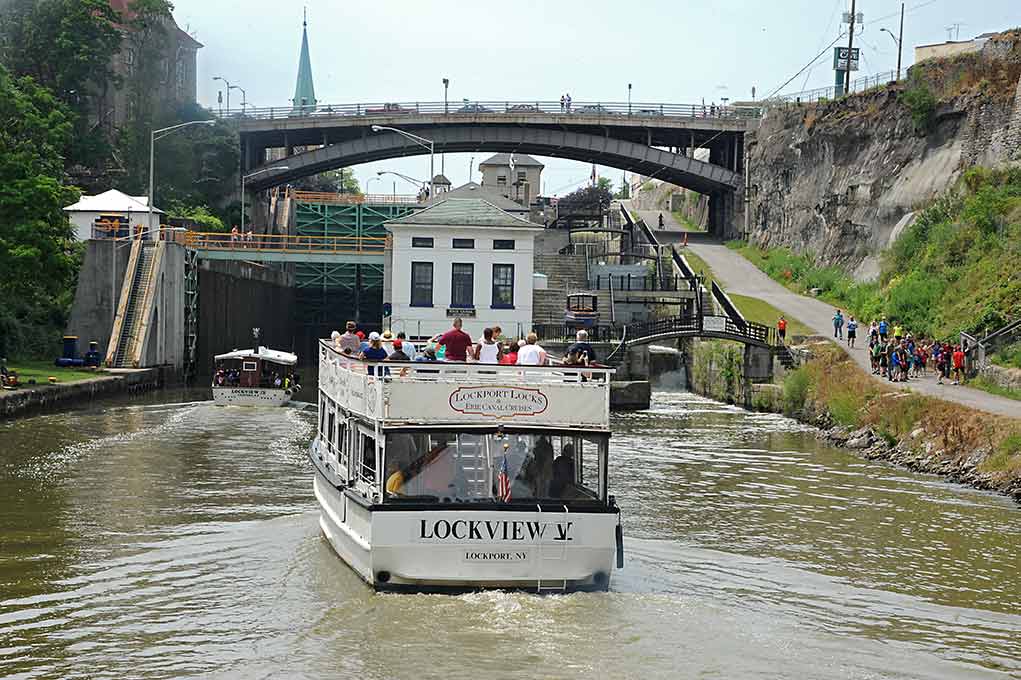 Lockport, located just 18 miles from Niagara Falls, USA, is home to the historic Erie Canal “Flight of Five” Locks (circa 1842). Learn more about Erie Canal history at the Erie Canal Discovery Center or Victorian life in Niagara County at the Historical Complex. Before hitting the trail, experience the canal with a boat ride offered by Lockport Locks and Erie Canal Cruises or the Lockport Cave and Underground Boat Ride.

Start your day’s ride at Locks 34/35 in the center of Lockport. The entrance to the Erie Canalway Trail is on the north side of the canal. Today’s ride is only 28 miles so you can take it easy. 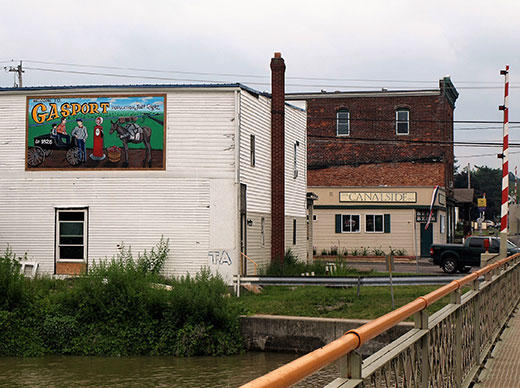 From Gasport, take a side trip to Becker Farm (3760 Quaker Road, 585-772-2211), about two miles north of the Trail, for wine tasting, a farm market in the original farmhouse, and plenty of period antiques. 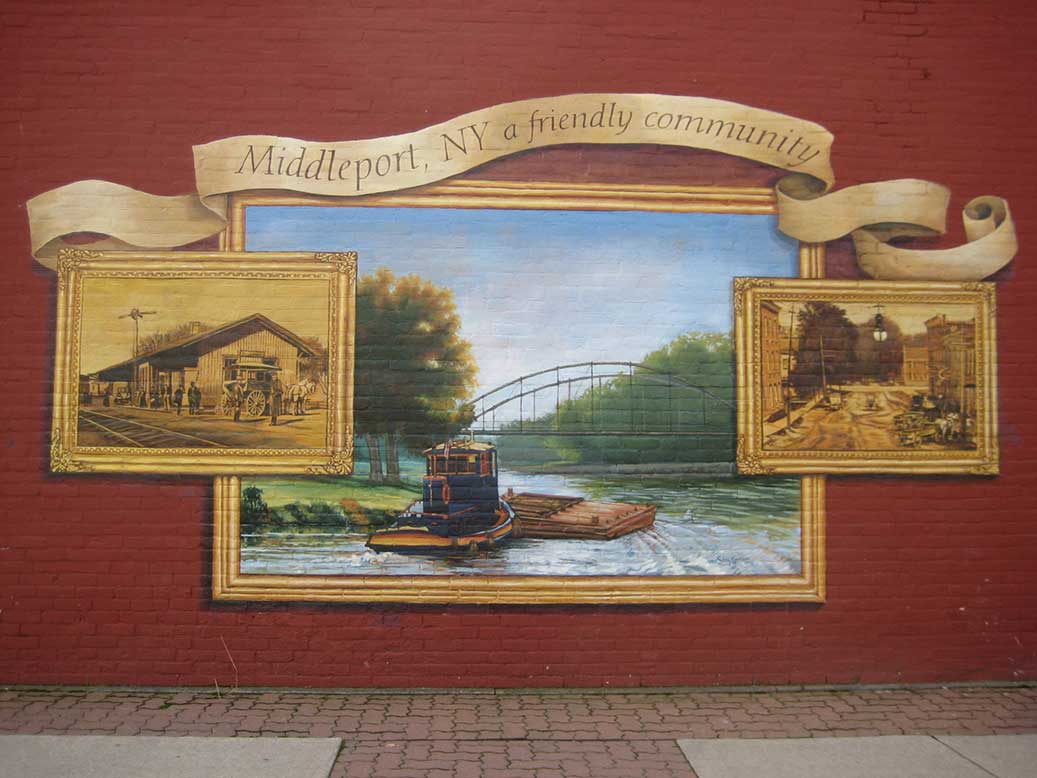 The Trail continues east through the rich farmland and orchards of Niagara County for another six miles to Middleport, where you can enjoy a cold drink or a cup of coffee. 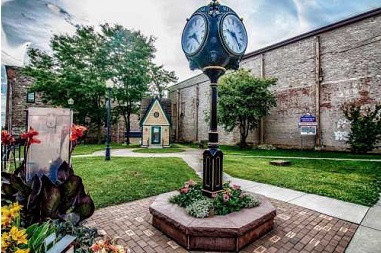 Five miles down the trail, you’ll know you are in Medina when you see the large red apple, an apple country landmark!

Your ride for the day is about half over, so Medina’s a good lunch stop. Railroad fans shouldn’t miss the Medina Railroad Museum (530 West Avenue, 585-798-6106), the largest freight depot museum in the country, the museum features an extensive collection of artifacts and memorabilia plus one of the largest HO scale layouts in the nation. Just north of town, the Medina Stone Farm (255 Route 63, 585-789-9238) features dances, lunches, and tours. For a natural experience, try riding south about five miles to the Iroquois National Wildlife Refuge (1101 Casey Road, 585-948-5445), a 10,000-acre refuge has trails and public access overlooks where bald Eagles nest and other birds nest. As you head east from Medina, be sure to stop after 2.5 miles at Culvert Road to see the only road that goes under the Erie Canal, listed in Ripley’s Believe It or Not. 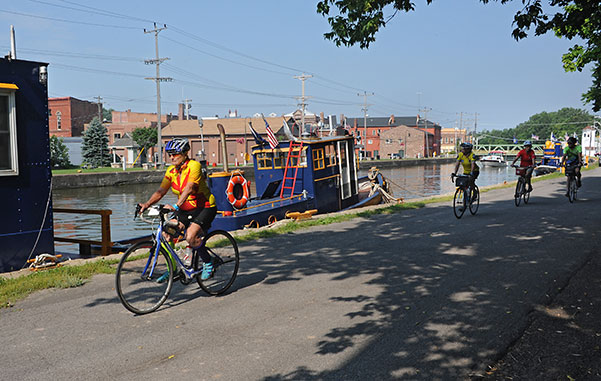 Your first overnight, Albion, is 10 miles east on the trail. As you ride, enjoy the wide-open spaces and rolling countryside. Once in Albion, be sure to check out historic Courthouse Square, featuring a 19th century Greek Revival courthouse and three churches, including the 1894 Romanesque Revival Pullman Memorial Universalist Church, built by railroad car entrepreneur and former Albion resident George Pullman. Many building in Albion use locally-quarried Medina sandstone. The Cobblestone Society Museum (14393 Ridge Road West, 585-589-9013) celebrates cobblestone masonry, a building technique unique to the region, and offers guided tours, including one of the oldest cobblestone church in North America and the parsonage once owned by newspaper publisher, activist, and politician Horace Greeley. East of town of Route 31, climb the 58-foot-high Civil War Memorial Tower (made of Medina Sandstone) to enjoy a panoramic view. 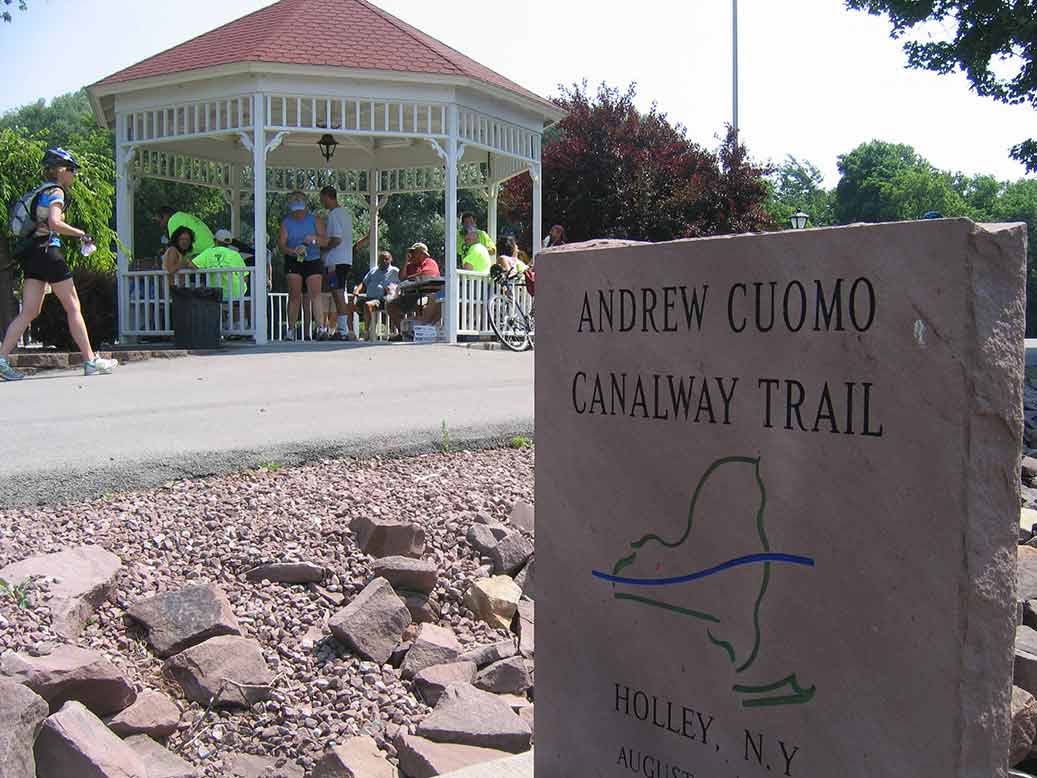 In Holley, about 10 miles east, check out the Canal Park on the south side of the Canal, and take a hike to the nearby falls or just relax and watch the boats go by. Another option is a 2.5-mile side trip north along Hurd Road to the Hurd Orchards roadside shop, offering fresh produce, bread, and preserves from a 200-year old family farm. 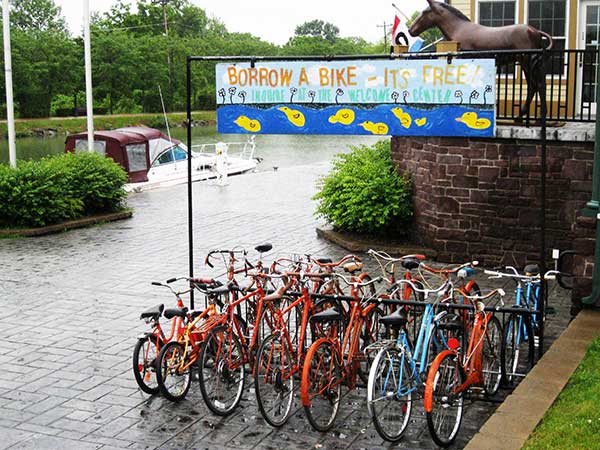 Brockport, 5.5 miles to the east, is another great choice for lunch and sightseeing. Known as the “Victorian Village on the Erie Canal” Brockport is home to many stately wooden homes, and the State University of New York campus. A number of restaurants and shops line lively Main Street (NY 19). Self-guided tours are available at the Village Hall (49 State Street, 585-637-5300), and the Canalside Welcome Center, where you can find Wi-Fi, showers, and laundry facilities.

Halfway between Brockport and Spencerport, and about 1.5 miles off the trail, is Springdale Farms (696 Colby Street, Ogden, NY, 585-352-5320), an operating farm that provides meaningful work opportunities for men and women with developmental disabilities to take care of the animals and the grounds, assist with group tours and greet visitors. The farm welcomes visitors. 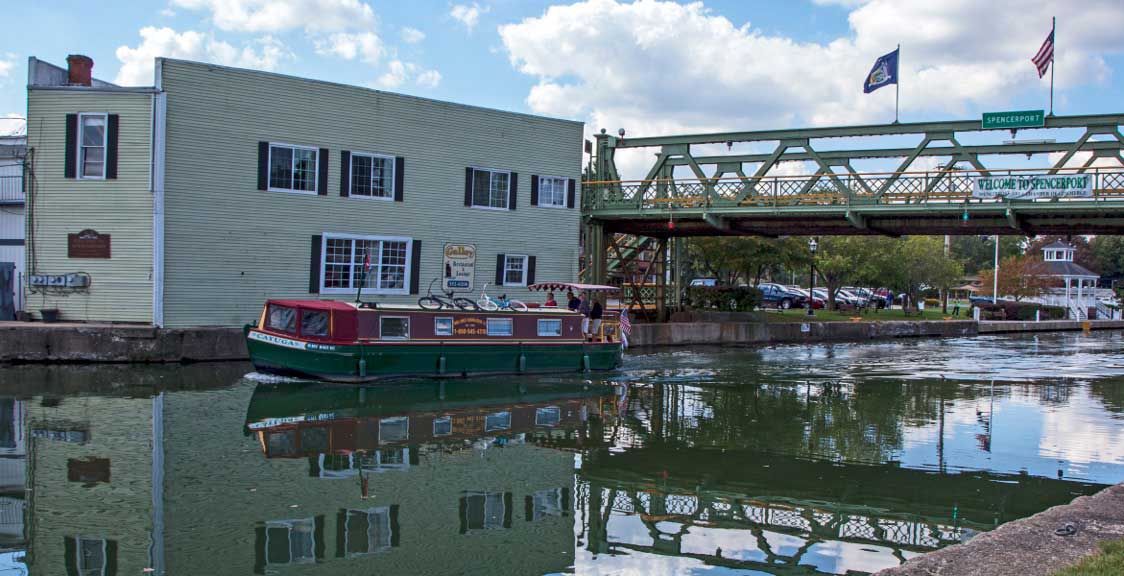 Spencerport, six miles east of Brockport, was a bustling canal center in the late 1800's. Warehouses shipped out produce such as grain and beans and the community boasted three hotels, three grocery stores, two drug stores, two shoe stores, four blacksmith shops, three cooper shops, and two sheet metal shops. Spencerport preserves this heritage in its historic district. Shopping and restaurants are nearby. Across the canal, visit the Spencerport Depot & Canal Museum which also serves as a visitor center. 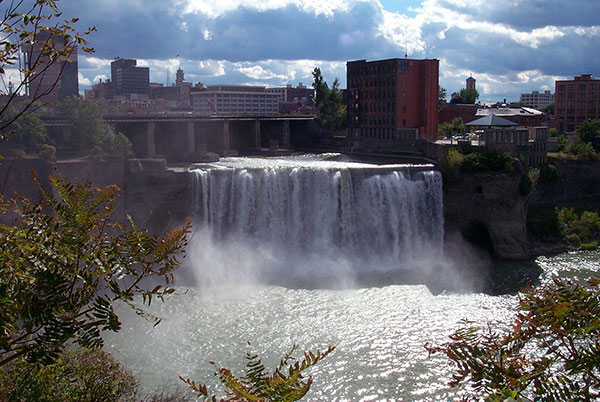 Rochester, your second overnight, is 10 miles to the east. Take the Genesee Riverway Trail, which intersects the Canalway Trail in Genesee Valley Park, two miles into the City of Rochester for restaurants and accommodations.

Rochester was one of several “boom towns” created by the Erie Canal, first known as the “flour city,” because of the numerous flour mills located along waterfalls on the Genesee River, and then later as the “flower city” because of its many seed companies and nurseries.

Rochester’s numerous historical and cultural attractions include the George Eastman House Museum of Photography and Film (900 East Avenue, 585-271-3361), where you can tour the home of the founder of the Eastman Kodak Company and view some of the museum’s vast array of photographs and films. The Susan B. Anthony House (17 Madison Street, 585-235-6124) tells the story of the legendary American suffragist, and was the site of her arrest in 1872 for voting. The Rochester Museum, Science Center & Planetarium (657 East Avenue, 585-271-4320) offers an array of exhibits, hands-on activities and sky shows. The Memorial Art Gallery at the University of Rochester (500 University Avenue, 585-473-7720) has a permanent collection spanning 5,000 years as well as contemporary exhibits and traveling exhibits from the world's major museums.

If you don’t feel comfortable riding on city streets, you could continue on the Canalway Trail about six miles to Pittsford, and take a taxi back into Rochester to see the sights. 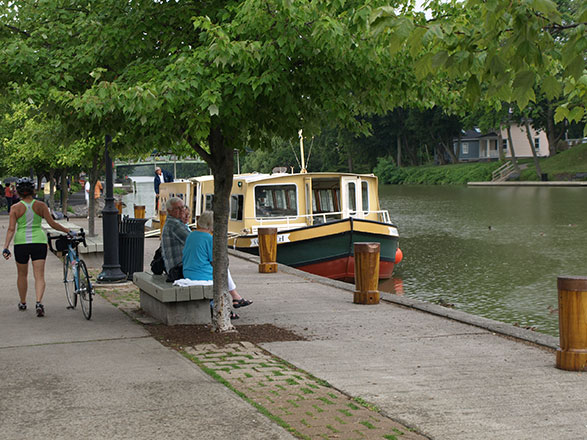 Schoen Place, located directly on the Trail, has a bicycle shop, as well as several restaurants and specialty shops. From Schoen Place you can tour the canal on the Sam Patch (12 Schoen Place, 585-262-5661), an Erie Canal packet boat. This lovely ride includes a “lock through”, an entirely different perspective on the Canal, as well as food and drinks. The historic district of Pittsford, just a short bicycle ride from the Canal, includes 19th-century homes in the Federal, Greek Revival, Victorian, and Queen Anne styles. 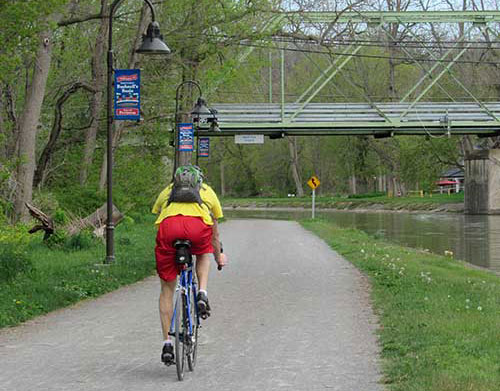 In about three miles, you’ll see the hamlet of Bushnell’s Basin across the canal. Cross the bridge for an ice cream or to visit the restaurants and shops. The historic c. 1818 Richardson’s Canal House Inn predates the canal and offers gourmet dining on the banks of the canal. 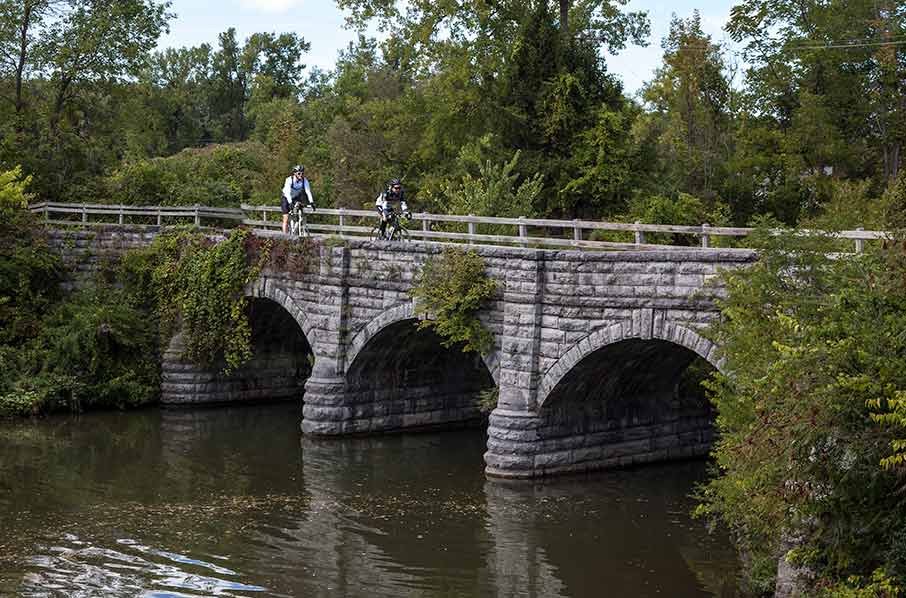 Nine miles to the east, between Macedon and Palmyra, don’t miss Aqueduct Park and the Aldrich Change Bridge (1858), the oldest iron bridge in New York. The opening of the enlarged Erie Canal in the mid-1800s provided little room for the towpath through downtown Palmyra, necessitating the construction of the change bridge to carry the towpath across the Canal. Here you will also be riding over the remains of the enlarged Erie Canal's Mud Creek Aqueduct.

Palmyra is the birthplace of Joseph Smith, the founder of the Church of Jesus Christ of Latter-day Saints, so closely tied to the church’s beginnings. Visitors can tour several Mormon-related sites including the Joseph Smith Home & Sacred Grove (863 Stafford Road, 315-597-1671). Hill Cumorah Visitor Center, at the location believed to be where Smith received the golden plates from the angel Moroni in 1827, is a good place to start. 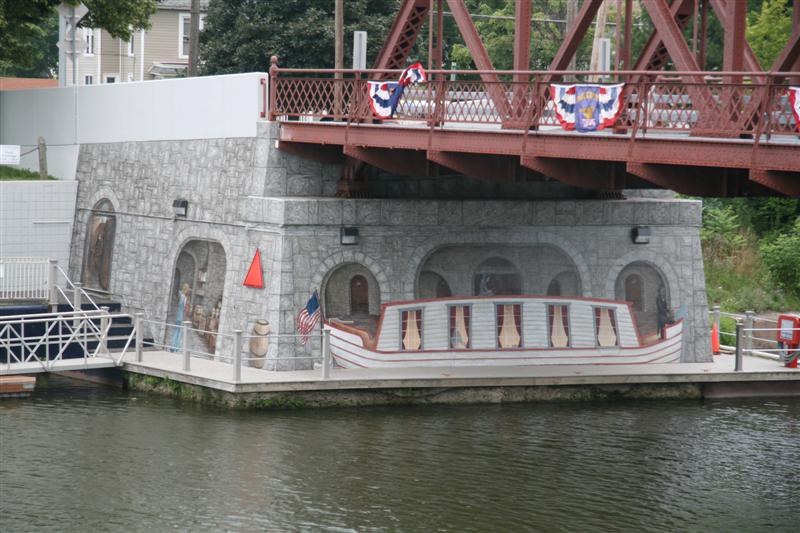 Continue another eight miles to Newark where there are restaurants and lodging. The Hoffman Clock Museum (121 High Street, 315-331-4730), located in the public library is worth a visit. The Museum houses the clock collection of Augustus L. and Jennie D. Hoffman, with an emphasis on the history of New York State clockmakers, but a collection spanning the globe. Newark’s Spencer Knight Park (between East Avenue and North Main Street Bridges) offers showers, laundry facilities, and Wi-Fi for cyclists and boaters. 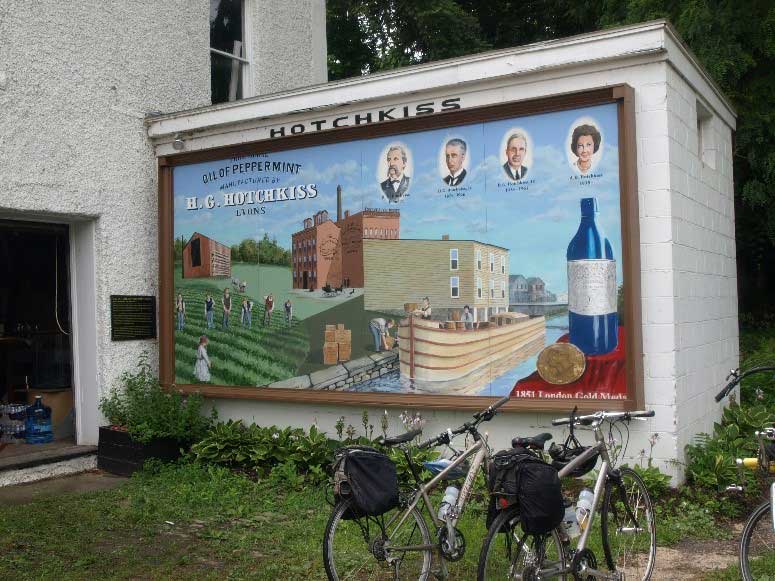 Lyons, your final destination, is a six-mile ride. Once known as “The Peppermint Capital of the World” because of the large quantities of the oil that were produced, Lyons today features a reminder of its industrial heritage with a working Erie Canal dry dock. Visit the Hotchkiss Building, operated by the Lyons Heritage Society, to learn more about the history of production of peppermint oil in Lyons.

To the east of the village is the Trail of Hope, a 3-mile fully accessible and inspirational trail surrounded by a variety of themed gardens.

Parks & Trails New York's Cycling the Erie Canalway Trail guidebook is a great resource to complement this itinerary. Click on the button below to learn how you can take it with you on your next trip.

Learn More About the Guidebook