AND WE'RE OFF! DAY 1: BUFFALO TO MEDINA

Al Hastings and April Amodei, Co-Directors of the Cycle the Erie Canal Tour
would like to welcome you to the 2020 Virtual Celebration 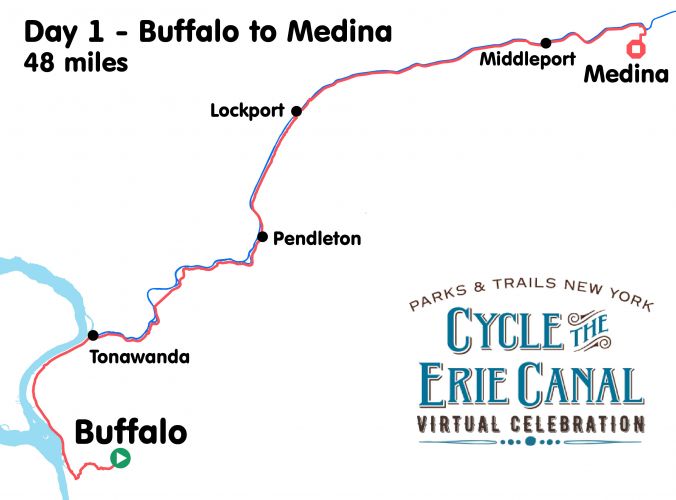 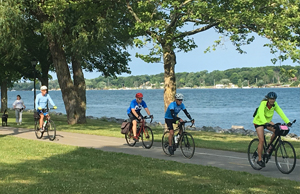 Depart Buffalo and be treated to a serene riverside multi-use trail with views of Canada and Grand Island across the Niagara River. Stop along the way to get a sense of place by reading the numerous interpretive panels dotting the trail. Niawanda Park serves as an ideal pit stop before you turn east, directly at the point where the Erie Canal officially meets the Niagara River. 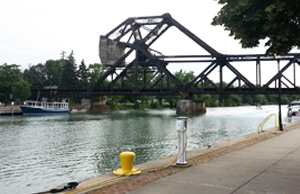 An historic bridge in Tonawanda has an interesting story. It uses a giant cement block as a counterweight. Apparently the bridge was only opened once in its near century of spanning the canal. The Niagara Branch, a blog from a railroad enthusiast, describes this point of interest in more detail. 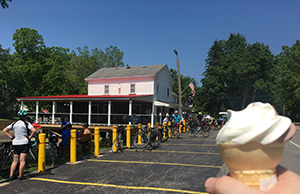 If you're expecting to lose weight on the tour, forget about it! Ice cream is a recurring theme throughout the eight days .Uncle G's in Pendleton is one of the first ice cream stands you'll encounter and, despite the fact you'll probably arrive before noon, it will be flooded with fellow cyclists. One of over 100 certified Bike Friendly Businesses along the route, Uncle G's has become a "go-to" destination for Cycle the Erie Canal riders over the years. Visit Uncle G's. 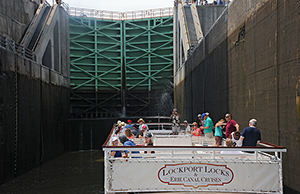 One of the highlights of the tour is a complementary boat ride through Lockport's iconic "Flight of Five" locks. Developed to allow boats to navigate the change in elevation caused by the Niagara Escarpment, the "Flight of Five" was considered one of the marvels of modern engineering when complete. After your boat ride, stroll around town to explore underground sluiceways, caves, and the “Upsidedown Bridge” as you begin to ride hundreds of miles of Canalway Trail through charming villages and rolling farmland.

One of the biggest perks of the tour is knowing that you are not alone on the ride! The Cycle the Erie Canal Tour SAG (Support And Gear) team are along with you every pedal of the way. Whether you experience mechanical issues or take a wrong turn they are always a phone call away.

WHAT HAPPENS ON DAY 0 (THE SATURDAY BEFORE THE TOUR)?

SAG (Support and Gear) riders Amy & Dee show you where you'd be camping, the scenes from the pre-tour ride, and more.

From the Day 0 Overnight Location

Amy Pedlow, the Buffalo Coordinator is on-site at Nichols School where there would typically be a tent city in the background.

About the pre-tour ride to Niagara Falls

On-site at the Niagara Corridor 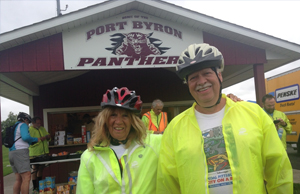 George and Liz rode the tour in 2015 and had such an incredible time that they returned again the following year. They extensively documented their experience by creating web pages that summarized their ride each day, highlighting side trips, mileage, weather, overnight camping locations, and even their meals each day. Discover the tour through the eyes of two very observant riders!

View More Stories, Photos and memories from Past Riders

Are you cycling anywhere this week? We want to hear from you! Please share your stories with us on social media, or email your pictures, ride maps, or anything else about your experiences. 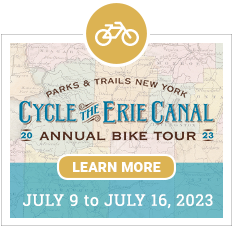